After recently taking a look at HP’s top of the line calculator (see my HP 50g review), I am now turning my attention to reviewing their entry level models. The HP 39gs and HP 40gs are an affordable alternative to the Texas Instruments lineup of calculators.

In reviewing the HP 39gs and 40gs, I found them to be extremely affordable, entry level calculators. They are designed primarily for those on a budget or for high school students or college students that may only have to take one or two classes that require a graphing calculator. They are great for an advanced algebra or pre-calculus student, or even a student taking just one calculus course.

What’s the difference between the HP 39gs vs. HP 40gs? 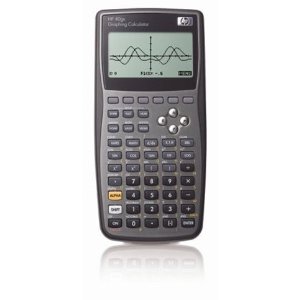 Comparing HP 39gs vs. HP 40gs, the difference is the CAS, or computer algebra system. The HP 40gs has a CAS and the HP 39gs does not. A CAS calculator has the ability to solve equations involving variables, factor, and do many more symbolic algebra calculations. A CAS is a really powerful tool, especially if you are planning to take calculus. CAS calculators are allowed on the SAT and AP Calculus tests, but they are not allowed on the ACT, so you’ll need to consider that if you plan to take the ACT.

Because the 40gs has a CAS, it will also do things like simplifying radicals (square roots) and exact trig values. The HP 39gs doesn’t have these features. This isn’t that surprising. Texas Instruments calculators have the same differentiation on the TI-Nspire and TI-Nspire CAS, and Casio with the fx-9750GII (review)and fx-9860GII (review) (although it doesn’t have a CAS).

The biggest selling point is the cost. Of the “Big 3” calculators manufacturers (Texas Instruments, Hewlett Packard, and Casio), only Casio’s fx-9750GII is as affordable. The fx-9750GII is a really sweet little calculator, but it doesn’t have a CAS. The HP 40gs is the only calculator with a CAS at its price point. You cannot find a cheaper calculator with a CAS than the HP 40gs, and if that’s important to you, this calculator is going to be a clear winner against the TI-89 Titanium and TI-Nspire CAS.

Going beyond the price, these are really solid calculators. I love HP’s menu system. Most features are easily accessible in just a couple of button presses. Usually the first button press with either bring up a “pop-up” menu, similar to right clicking with a mouse, or a small, unobtrusive menu along the bottom of the display. These small menus allow you to access additional functions through a row of buttons just below them. If you ever used an old school TI-85 or TI-86, it’s a lot like the F1-F5 buttons those calculators had. I always thought that was one of the best features of those old Texas Instrument’s calculators, and I think the concept works great on the HP 39gs and HP 40gs.

The feature set of the HP 39gs and 40gs is very good, but what really sets them apart is the cost. If you are only planning to take one or two math classes that require a graphing calculator, you don’t want to spend a small fortune. With the HP 39gs and HP 40gs, you don’t have to. I’m especially impressed with the HP 40gs. There’s no other graphing calculator with a CAS that’s even close to this cheap. If you are a calculus student on a budget, you can’t pass it up.

Click here to buy your HP 40GS on Amazon .