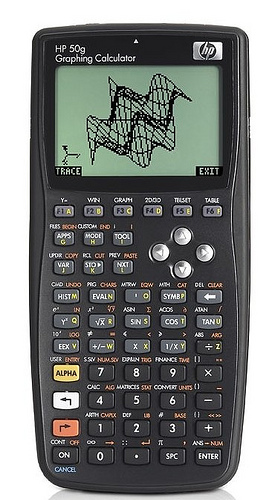 Click here to buy your HP 50G on Amazon .

HP graphing calculators haven’t had the highest profile the last few years, but that’s about to change with the release with the upcoming HP Prime-review. Despite the lack of new models, the HP 50g has continued to be a popular choice, in fact, the most popular graphing calculator choice among HP fans. Back in the late 90’s when I was an engineering student at the University of Illinois and my graphing calculator of choice was actually, an HP, the HP 48gx. HP graphing calculators have come a long way since that time. They have always been among the most powerful, feature rich calculators on the market, but HP has really improved usability in recent years. My old HP 48gx was a really cool calculator, but it had a pretty steep learning curve. By contrast, the modern HP 50g is much more powerful, visually elegant, and easy to use.

Who is the HP 50g designed for?

While preparing this HP 50g review, it felt like a clear competitor to the TI-89 Titanium (review). Comparing the HP 50g vs. TI-89 Titanium, both have a CAS (computer algebra system), a similar screen resolution, and the ability to graph in 3D. The 50g is HP’s high end device, and it has advanced capabilities. This means it is most appropriate for students in calculus and above (or planning to take calculus). Like most CAS calculators, the HP 50g is banned from the ACT but is legal for the SAT and AP Calculus tests.

There’s actually quite a lot to like with the HP 50g. I really like the button set up. You will find most of the features on the HP 50g no more than a couple of button presses away. Aside from buttons for numbers and operations, most buttons will sometimes bring up a modern pop-up menu and other times an unobtrusive set of selections at the bottom of the display accessed by the F1-F6 buttons. Any “old timers” out there who ever used a TI-85/TI-86 will be very familiar with this method of using the F1-F6 keys. It’s really nice that this style of “menu” doesn’t block your view of the numbers and operations you’ve been typing onto the display, and I wish TI had stuck with it rather than going the direction they did with the TI-83/TI-84.

There are also some small but nice touches with the HP 50g. It features an expandable memory via an SD card slot. It comes with a carrying case. There’s a good help menu that explains the formatting of every CAS command and displays an example of how to use it. HP goes against the grain and offers sound on some of their calculators like the 50g. I just turned it off, but some may really appreciate it. And as with most graphing calculators today, there’s a USB port to upgrade the operating system and add apps.

I also can’t write this section without talking a bit about Reverse Polish Notation. RPN gives users the option to enter their calculations in different manner, oftentimes more efficient for long calculations. 3+4 becomes 3 4 +. HP has been the one calculator manufacturer to embrace RPN in calculators. This is sort of one of those “love it or hate it” features. If you find yourself in the “hate it” camp, don’t worry, as RPN is easily turned off in modern HP calculators like the 50g. If you love it though, HP calculators are the only way to go.

HP doesn’t have the market share of Texas Instruments, but that’s not because the HP 50g doesn’t compete well. This is a good calculator that will meet the needs of advanced users while still being easy to use. If you’re looking for a budget alternative to the TI-89 Titanium that provides almost identical functionality, the HP 50g is a strong competitor.

However, if you’re looking for a top of the line model from HP, you really need to take a wait and see approach. I’ve heard from HP officials within the last few days, and I’ve been told that I can expect to have an HP Prime review unit around the end of this month. Hopefully, that will mean that the HP Prime is still on pace for a back to school release for the 2013-14 school year. While I have yet to do an HP Prime review, it’s hard to imagine that the much new unit will win out in the HP 50g vs. HP Prime competition.

Please click here to buy your HP 50G on Amazon .