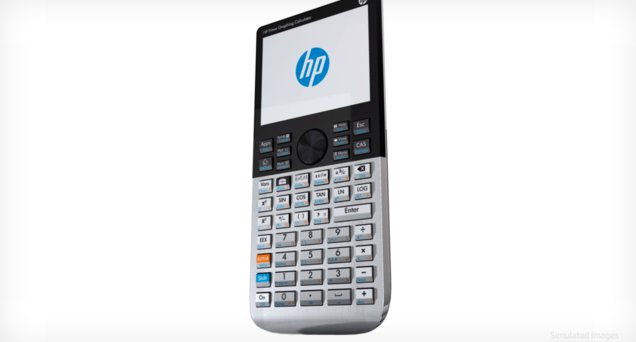 Update: “If you are looking for the latest on the HP Prime, don’t miss my HP Prime review.

With Texas Instruments and Casio making virtually all of the calculator news since I started Tech Powered Math in the summer of 2010, it’s sometimes been easy to forget that there is still a third major graphing calculator manufacturer, Hewlett Packard. Rumors started circulating a couple of weeks ago on the other side of the pond that HP has been quietly getting ready to play an ace they had up their sleeve. Now, HP has broken their silence in a big way on YouTube with a video showcasing that ace, the new HP Prime.

The Prime is a stylish new color graphing calculator that looks ready to compete with the likes of other color calculators like the Casio Prizm and ClassPad 400 and the TI-Nspire CX and TI-84+C. However it offers an absolutely killer feature that no other graphing calculator ever has had, a multitouch display. The closest thing we’ve seen to multitouch from one of the “big 3” is the new TI-Nspire iPad app from Texas Instruments, and that’s obviously not on a standalone device.

I’m left with a number of questions at this point. The biggest, of course, is what the status of the HP Prime will be with the College Board. Will it be legal for the SAT and AP tests? As I reported last month, I’ve got a reputable source that says the Casio ClassPad 400 is on the verge of acceptance from the College Board. That story seems more likely now, since it seems all but certain that HP has been petitioning their new device for standardized testing acceptance as well. If HP and Casio do, in fact, have touch screen devices on the verge of testing acceptance, then perhaps all the calculator manufacturers have been receiving assurances from the College Board that changes are coming to their antiquated calculator rules when the current season of testing wraps up. If that’s the case, then it would seem highly likely that the TI-Nspire iPad app is simply a warmup to a standalone touch screen version of the device.

But for now, the story is not the other players but the possible reemergence of HP as a power player in the graphing calculator game. As an engineering student at the University of Illinois in the mid 1990’s, my graphing calculator of choice was an HP-48GX. The build of that device had a feel of quality and the performance went beyond what I saw from Texas Instruments calculators at the time. On the contrary, in recent years, I’ve found HP devices to be adequate but without the build quality I knew in my HP-48GX and dated given the recent releases from Texas Instruments and Casio. I hope the Prime will be the calculator that sets a standard for top level quality that I remember from HP. The build looks excellent in the promotional video released, with a metal casing that we’ve never seen in the TI-Nspire or Casio Prizm.

Just a couple of years after HP was on the verge of eliminating their calculator division (and all consumer products), I’m not sure what the current identity of HP Calculators is. For years, Texas Instruments has focused on being the leader for teachers, offering them the professional development, resources, and hardware add-ons to make their products a force in the classroom, a strategy that has paid big dividends. Casio has been positioning themselves as the TI alternative in recent years, focusing on the affordability and ease of use of their products. HP? Well, they have a cult like following with their financial calculators, but I don’t feel like their graphers have much momentum with educators. It’ll be interesting to see if the HP Prime can better establish their identity with educators and make inroads in the American classroom. It sounds like I’ll have more information on the HP Prime soon, and I’ll share it with you as soon as I do.