Rumor Mill: College Board to Change the Rules of the Game 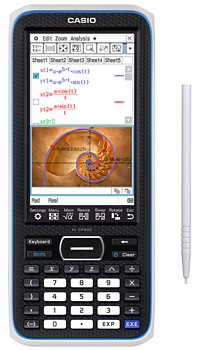 On the verge of College Board approval?

It’s certainly a stretch to call what I do on Tech Powered Math journalism. However, whatever journalistic instincts that have developed in me in nearly three years of writing at Tech Powered Math have taught me that a great place to look for stories at conferences is among the exhibitors. On the exhibit floor, you can find new products, new textbooks, and interesting rumors.

This was the case again this year when I spoke to representatives of the Bach Company, a calculator distributor at T3. In the process of discussing what kind of interest the Bach Company is getting from buyers on the new TI-84+C (lukewarm so far), I asked about the new color Casio Classpad 400. Haven’t heard of the ClassPad? That’s no surprise, as it hardly makes a dent in the American market due to the College Board and ACT’s prohibition of touch screen calculators on their standardized tests. While it’s wildly popular in a few countries like Australia, you aren’t going to sell many calculators in America unless they’re cleared for usage on the SAT and/or ACT.

The Bach reps told me they’re expecting a big uptick in ClassPad 400 interest over the summer. That’s because Casio representatives have assured them that Casio is on the verge of obtaining clearance from the College Board for the new ClassPad to be used on their tests. The College Board, which is behind the SAT and AP tests, has banned touch screen calculators from the beginning of touch screen devices. I was told the announcement about the ClassPad would come in the next 30-60 days.

Skeptical? I can’t blame you because this would be a major change in a longstanding policy. However, I’ve got to tell you that this isn’t the first time I’ve heard a story from Bach reps that seemed unlikely but turned out to be spot on. Back in 2011, the very same source tipped me that HP would be reissuing the HP-12C, a financial calculator with a fanatical following that had been discontinued decades earlier. A few months after I posted the story, HP publicly confirmed it.

If the College Board does, in fact, change their touch screen policy, I will applaud them for changing it and Casio for convincing them to do so. It’s an archaic policy, and I’ve never heard a rational defense of why touchscreens should automatically be banned in the year 2013, probably a holdover policy from the early Palm Pilot days. Hopefully, the ACT would respond in turn, assuming a non-CAS touchscreen calculator were released by Casio or a competitor. ACT has a longstanding policy of banning CAS calculators, and the ClassPad is a CAS calculator.

As big a feather as this would be in Casio’s cap, the Texas Instruments response would be just as interesting. The color TI-Nspire CX was announced less than 6 months after the Casio Prizm became the world’s first full color graphing calculator. One would have to think that TI would respond rapidly if touch screen calculators became legal, possibly with a new iteration of the TI-Nspire or an entirely new piece of hardware running the Nspire OS.

So I hope it’s true, because the places this news could take us would really be something to see.