Texas Instruments provided me with a new TI-Nspire CX II review unit for this post. Please note that some links on this site are affiliate links, meaning a percentage of your purchase will support my work at Tech Powered Math at no additional cost to you. Thanks for your support!

What is the TI-Nspire CX II?

Over my many years teaching in a high school math classroom, I spent more time working with TI-Nspires than any other calculator, and it became my favorite graphing calculator platform. I have been something of an evangelist for the TI-Nspire CX, and that’s because I saw so many places where it benefited students. High achieving students, lesser achieving students, the ACT, SAT and AP tests, math team: when students are paired with a TI-Nspire CX and a little bit of instruction on how to use it, the learning that goes on is incredible. This post is both a TI-Nspire CX II review and TI-Nspire CX II CAS review, although you’ll see while reading it, the two models have far more in common than they do differences. I’m excited to have that hands-on look at this new Nspire model. Let me go into why the TI-Nspire CX II tops my list of the best graphing calculators after many years of the older TI-Nspire CX taking the cake.

Texas Instruments has always been great about continuing to issue updates for TI-Nspire operating system. These OS updates provide additional features and keep the look and feel of the operating system current. Most years see a couple of updates, making it a great choice as a model that you can feel confident will be supported throughout 4 years of high school or college.

What does all of this mean for potential buyers of a new TI-Nspire CX II? There are some appreciated new changes to the hardware, such as the faster processor. This will keep students and teachers nimbly moving along in situations that might have bogged down the older model (my students used to love to have dozens and dozens of tabs open on the original TI-Nspire CX until it ground to a halt). I will also say that I’ve noted the battery on the TI-Nspire CX II will hold a charge for a really long time when not in daily use–think months–much like the TI-84 Plus CE.

However, most of the visible upgrades are being enabled not via hardware but the new changes to the TI-Nspire OS. The newest version of the OS is version 5.1. Recent updates to the Nspire OS will give the user access to features such as tick-mark labels when graphing, animated path plotting, dynamic coefficient values, improved programming features, and more. 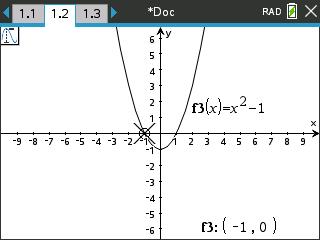 For all users of the older TI-Nspire CX, the latest version of the operating system is OS 4.5.1. With the older generation of the TI-Nspire CX calculator, you can’t upgrade to the new 5.1 OS. Since the latest OS versions for the CX II are not coming to the older CX calculators, it’s likely that any additional upgrades will be minor bug fixes. That’s a bummer, because there are definitely a lot of students that purchased a TI-Nspire CX over the last year, and they probably won’t get any more upgrades over the rest of the high school/college years that they’ll own the calculator. Worth noting: purchasers of the older TI-Nspire CX models are still eligible to update their student and/or teacher software to take advantage of what Nspire OS 5.1 has to offer. So while you can’t take use those new features on the calculator, you can on a computer.

Even on the now older TI-Nspire CX, I have felt for many years that from an educational standpoint, the TI-Nspire operating system was superior to any other TI product (such as the TI-84 or TI-89 models). I like the fact that it uses the type of interface that kids who have grown up in the internet era are familiar with. That means it has drop down menus, the ability to open multiple tabs like a browser, a drag and drop interface, and a file and folder system that’s just like using a computer. Graphing calculations have been much simpler, not requiring much button pressing beyond the trace feature because the Nspire automatically detects max and min values and intercepts while using trace. It’s also easy to type in your calculations using mathematical symbols so that they appear just like a student would see them in a book or write them in their homework, so there’s pretty much no code to learn. What really sets the Nspire apart has always been its dynamic properties. On one screen, you could have a graph, an equation, and a table of values. Grab the graph and drag it into a different shape, and all three adjust simultaneously. 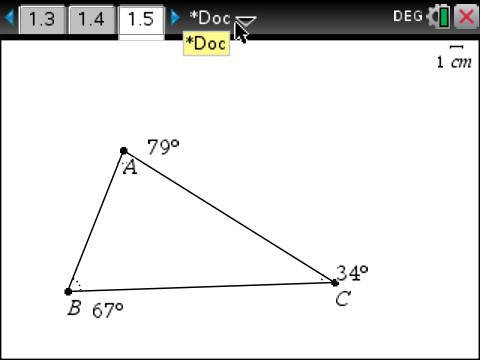 For years, the TI-Nspire models have had superior geometry and graphing capabilities

Texas Instruments continues to be extremely active in training teachers how to teach with their TI-Nspire platform as well. “Get Nspired” is more than a catch phrase. They hold webinars demonstrating engaging ways to use the Nspire CX II that are of extremely high quality. Additionally, the last couple of years, they’ve started a series of initiatives like STEM Behind Hollywood, STEM Behind Health, mISSion imaginaTIon. These partnerships with powerful groups like the entertainment industry and NASA show students how mathematics and science can be applied in exciting fields, all of course, with your TI-Nspire graphing calculator. 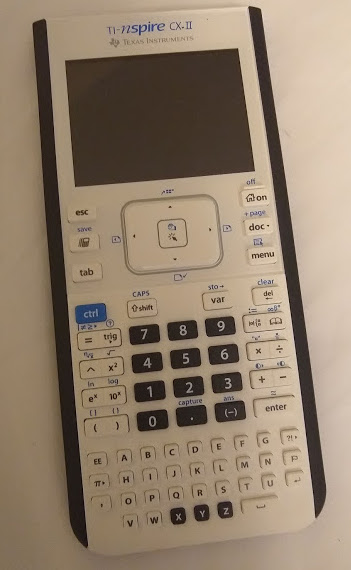 The TI-Nspire CX II also gives you the ability to plot right onto pictures, some of which are included with the device. You also have the capability to load any JPG, BMP, or PNG file onto the device and graph functions right on top. These images look surprisingly good on the TI-Nspire CX II. The idea with this image graphing feature is the study of functions/equations in real life. Think of plotting a parabola onto a real projectile motion or an ellipse around an image of a planetary orbit.

What Is the TI-Nspire CX II CAS? 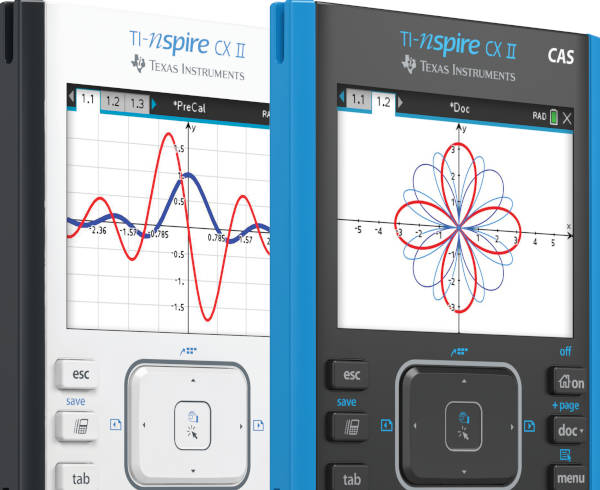 Let me explain that in more detail. Judging based on polls I’ve run in the past on Tech Powered Math, I’ve found that there’s actually more interest among TPM readers in the TI-Nspire CX II CAS than there is in the TI-Nspire CX II. If you’re unaware of what a CAS calculator is, it is a Computer Algebra System calculator. This means the calculator has the ability to do algebraic manipulations on variables, such as x + x = 2x. This is a great thing if you plan to take the SAT or AP Calculus, where this type of calculator is encouraged, but not so great if you are taking the ACT, where it is banned.

The TI-Nspire CX II and TI-Nspire CX II CAS have most of their hardware and functions in common. They’re so similar, it’d be easy to mistake one for the other, even after playing with it for a bit. However, the CAS version has a number of menus and submenus tucked away that you won’t find in the non-CAS version. In the past, the questions I’ve received about the Nspire CAS tend to be from TI-89 users wary of the the advanced calculus capabilities of the Nspire CAS. For years now, differential equations and a host of advanced calculus features have been included for all TI-Nspire models.

While I’ve taken math courses all the way to a graduate school level, my teaching experience only goes through second semester college calculus, so I can really only speak to classes at that level and below. In those classes, I’d much prefer the TI-Nspire CX II CAS to a TI-89 Titanium. Even though the TI-89 Titanium (review) is an excellent calculator, the Nspire CX II CAS is easier to work with on conics, has a much nicer UI, is easier for graphing, and has 3D graphing for a couple years now, a drawback that was a problem when the series was first launched, but no more. If your situation allows for it (see next section), the TI-Nspire CX II CAS really is my favorite graphing calculator on the market today. Click here to buy your TI-Nspire CX II CAS Graphing Calculator on Amazon .

Is the TI-Nspire CX II allowed on the ACT / SAT?

The TI-Nspire CX II is allowed on most standardized tests, including:

Getting Started With Your TI-Nspire

If you find that you need a little help learning how to use your TI-Nspire, I recently started a line of books designed to help students and teachers learn how to use the calculator. TI-Nspire Tutorials Volume 1 is the TI-Nspire for Beginners, that helps you navigate all of the basic features of the calculator. TI-Nspire Tutorials Volume 2 is Using CAS Features Like a Champion, and will get CAS users started with those features only found on the CAS. Both books are currently available in Kindle format for the iPad, iPhone, Android, PC, and Mac. I haven’t had a chance to update these books for the new TI-Nspire CX II yet, but all the features in these beginner level books are available on the new models as well. They will serve you well if you are looking for a beginner book.

Is the TI-Nspire CX II Worth the Money?

The TI-Nspire CX II and TI-Nspire CX II CAS are not the cheapest graphing calculators available today, but they are well worth the price, and I highly recommend them. Years ago, when Texas Instruments debuted the TI-Nspire, it had a few warts, but with each year, they’ve continued to make massive improvements to both the hardware and software. Even at the beginning, I was impressed with how much faster kids caught on to features like fractions, graphing, and tables on the TI-Nspire than they did on the TI-84. From remedial Algebra through AP Calculus and my Illinois State Championship Math Team, the TI-Nspire CX II is my top choice for my students.

If you’re in the market for a new graphing calculator, a TI-Nspire CX II or TI-Nspire CX II CAS would be my choice. The original TI-Nspire CX models are still available for sale in many locations, but I’d go for the new model so you can feel confident about several years of OS support. However, if you already own the older TI-Nspire CX or CX CAS, I don’t think you need to be in too much of a hurry to upgrade. The upgrades in the CX II models are nice, but they are incremental and not so dramatic that I’d be rushing out to replace a still great device.