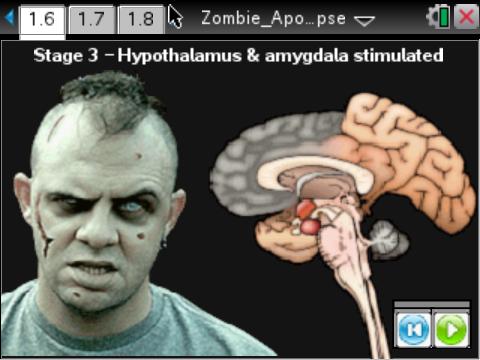 Yesterday, Texas Instruments revealed that it has been hard at work creating a series of supplementary curriculum STEM activities connected to movies. STEM Behind Hollywood is TI’s new program of TI-Nspire activities.  The first of these activities is Zombie Apocalypse, an activity inspired by zombie movies. The activity works on the TI-Nspire handheld, iPad app, or computer software. In addition to an interactive file that allows students to learn mathematics and science using the TI-Nspire, Texas Instruments has also bundled printable pdf files that include a student handout and teacher lesson plan. There are even a couple of instructional videos that can be show to students in conjunction with the lesson. I took Zombie Apocalypse for a spin on my TI-Nspire Teacher Software this morning, and I can confirm that it is really slick.

As always, Texas Instruments brand ambassador and star of The Big Bang Theory Mayim Bialik is on board, bringing her expertise, both with science and with Hollywood. TI also has Harvard Ph.D. Steven Scholzman on board. Schlozman, is a medical professor, zombie author, and serves as a Hollywood consultant, bringing scientific accuracy to works of science fiction.

This morning I had a chance to talk to Texas Instruments President of Education Technology Melendy Lovett about TI’s new Hollywood initiative. She told me that Texas Instruments is very excited to be bringing the “hottest things in Hollywood to the classroom.”

TI felt like Hollywood was a great fit to encourage student learning, both because of their existing partnership with Mayim Bialik, and because of how much interest students have in Hollywood. Said Lovett, “They love television. They love movies. This easily engages most students. They are interested to know the math and science behind the movies.” She also shared that Bialik recently taught the Zombie Apocalypse lesson to a group of middle school students who were very excited and engaged. “It doesn’t seem like work to them,” said Lovett.

Lovett says that the Zombie Apocalypse and the lessons that follow are targeted at middle school and high school students. She said that Texas Instruments feels like teachers of advanced high school courses may want to supplement or extend the activities to include more advanced concepts.

In the coming months, Texas Instruments is planning to release three more STEM activities for the TI-Nspire. Lovett said that teachers can expect a new release coming every 3-4 weeks. Those lessons will feature the themes of Space, Superheroes, and Forensics. You can expect to see the Space activity around the end of August or beginning of September.