Calculators for the SAT 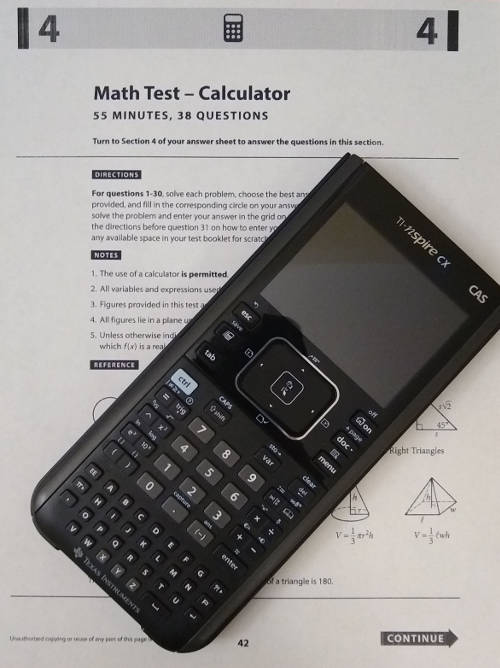 I picked the TI-Nspire CX II CAS as the best calculator for the SAT.

One of the most common students ask before taking the SAT is, “Can I use my calculator on the test?”  The answer is yes… if you are careful about which one you bring.  You do have to be careful to stick with the SAT’s list of approved calculators.  Fortunately, the SAT is more relaxed about what is allowed that many other standardized test companies. Basically, any of the following features on a calculator means it will be banned from use on the SAT:

Keep in mind that no matter what calculator you choose, the SAT math portion does have both a “No Calculator Section” and a “Calculators Allowed Section.” The No Calculators portion accounts for 1⁄3 of your math score.

What Calculators Are Acceptable on the SAT?

These rules allow for almost any Texas Instruments calculator.  If you own a TI calculator, you’ll be OK if you have one of the following:

You’re NOT going to be allowed to use the older TI models due to their QWERTY keyboards:

Most Casio and HP models are just fine, including the new Casio Prizm. The HP Prime is the only touch screen calculator allowed as of 2022. This list is not all-inclusive, but it does cover the most popular calculators on the market today. You will want to take advantage by having a graphing calculator on the test. One last important note on the SAT rules–you are allowed to bring more than one calculator.  You can only have one out at a time, but you can switch whenever you feel like it with the spare you have under your desk.  It is strongly advised to bring a backup calculator in case your primary has a problem. For more information, visit SAT acceptable calculators at the College Board website.

If you’re looking to do some study for the SAT, check out my post on the best SAT prep courses. Whether you are looking for some last minute cramming or to bulk your skills up over long term, there’s a program for you. Also, if you’re thinking of also taking the ACT, be sure to check out my post on calculators for the ACT.