Please click here to buy your Casio fx-9750GII on Amazon . 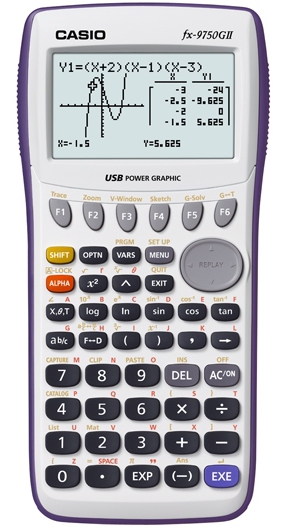 Casio’s 9750 series is the budget alternative in a lineup of Casio graphing calculators that is already the affordable alternative to Texas Instruments. The 2009 release of the the 9750GII introduced USB, making it even easier to upgrade your calculator’s operating system and upload apps. The natural comparison is the 9750GII vs. the 9860GII, its more powerful (and more expensive) bigger brother. In my recent review of the 9860GII, I found it to be an excellent device. Next, I turned my attention to review the 9750GII.

Casio markets itself as a simple to use and affordable alternative to their competitors, and that once again turns out to be true. At first glance, the 9750GII appears to be just a smaller version of the 9860GII. Upon closer inspection, however, there are some other significant differences to be found between them which I will highlight in this review.

Who is the Casio 9750GII designed for?

The button layout and menu system of the 9750GII is almost identical to the 9860GII, and that’s a good thing. You’ll find just about all of the important features of the calculator on the main menu. The buttons are laid out in a very logical manner.

Bigger isn’t always better, particularly when you’re talking about another thing to lug around in your backpack that’s probably already crammed full of books. This is one of the smaller graphing calculators on the market, but it’s still big enough to see the screen clearly, and the buttons are a nice size as well.

The biggest difference between the 9750GII and 9860GII is the 9750GII’s the lack of “mathprint” formatting. This means that exponents will use a carrot (“^”) instead of floating next to the base, fractions must be done with division symbols instead of a fraction bar, etc. A lot of these are simple adjustments, but it’s more of an inconvenience when you’re trying to do higher level calculations that require less intuitive formatting such as non-base 10 logs, summations, etc.

The other big piece of functionality missing in the 9750GII that big brother 9860GII has is exact values. The exact values are a big advantage the 9860GII has over its Texas Instruments rivals, the TI-84 and TI-Nspire, but they are missing in the 9750GII. Square roots are always returned as decimals rather than simplified. The same is true of trig values such as cos(30)

You will not find a cheaper entry level graphing calculator than the Casio fx-9750GII from a quality name like Casio. If you want have more money and want more features, the TI-Nspire or Casio 9860GII will provide them. However, sometimes students and parents find themselves in the situation of needing a graphing calculator for the last math class you’ll ever take. In those situations, it makes more sense to buy something cheaper. The Casio 9750GII provides a tremendous amount of features for the price. If you need to save a few dollars, it’s an excellent choice.

Please click here to buy your Casio fx-9750GII on Amazon .