Of Mind and Matter Review

Some links on this site are affiliate links, meaning a percentage of your purchase will support my work at Tech Powered Math at no additional cost to you. Thanks for your support!

This Christmas, I was given a copy of John Urschel’s memoir, of Mind and Matter. I was already somewhat familiar Urschel. He was known as something of a peculiarity in the sports world in the 2010s: the mathematician football player, first at Penn State, and then for the Baltimore Ravens. He had a big moment on the national scene a couple of years ago when he walked away from the NFL to complete his Ph.D. at MIT, still physically able to play and earn a considerable salary playing professional football. Regular listeners of the Freakonomics podcast have heard him on the show a couple of times, including the excellent episode “How Much Brain Damage Do I Have?“

As a sports fan, participant and coach throughout my life as well as having my own degrees in math, I expected to enjoy Of Mind and Matter when I finally picked it up last weekend. In fact, I was totally caught off guard by the nostalgia trip that Urschel took me on, something I didn’t expect was possible while reading the memoir of a person I’ve never met.

Urschel was already a strong math student before he showed up at Penn State, having been blessed with a mother that encouraged him to pursue his mathematical talents throughout his childhood. But like so many of us that ended up with math degrees, it seems like he didn’t really appreciate the scope of the subject when he arrived at college. He lays out the journey of his undergraduate mathematics career in great detail. He hopped along a somewhat unconventional path, skipping prerequisites and taking courses out of sequence. It wasn’t too long before he began befriending his professors and collaborating on research. Still, there are plenty of anecdotes from the courses and concepts that any undergraduate might take along the way: linear algebra, graph theory, fundamentals of proof and so on. 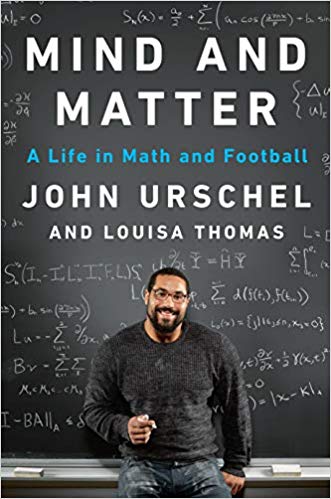 Urschel recalls in detail many famous problems that delighted him when learning of them for the first time:

Urschel recounts each of these problems and more in detail for the lay person, and better yet, conveys the wonder that he felt in understanding the concepts behind these problems. This was where my sense of nostalgia came from. Only a few people will be able to relate to the level of math research Urschel is doing by the end of his story. There are many more people who will relate to those mind opening experiences that mathematics provides, that sense of awe, in many cases by some of these same problems that Urschel relates. I’m fortunate to count myself a part of that second group. His story provides an opportunity to rekindle that first love of mathematics.

Of course, this is a story about more than math. Throughout his writing, Urschel constantly changes the scene back and forth between the classroom and the football field. We get an up close look at his transformation from borderline college prospect to college star to borderline NFL prospect to NFL starter. I wish I could say my own experience in the marching band at another Big Ten university made this part just as relatable, but that’d be a stretch. It’s fascinating to see nonetheless, particularly the closeness of the team at Penn State and the culture of a commitment to excellence.

The brutal nature of football is on full display, some of it self inflicted, as Urschel is an incredibly hard working individual. It’s also interesting to see that a person who has such a phenomenal work ethic is careful about noting the impact of luck of creating opportunities along the way, opportunities that he took full advantage of but couldn’t have created for himself.

Urschel also pulls back the curtain to give us a behind the scenes look at the one of the most shocking scandals in sports history, the Jerry Sandusky sex abuse scandal. These passages were somewhat difficult to read, surfacing memories of truly disturbing crimes for anyone who followed this story in news. Both the initial details of Sandusky’s crimes breaking in the news and the subsequent reactions I witnessed from Penn State fans online in the early days of the Sandusky scandal, while I’m sure not representative of that community as a whole, were very troubling and have continued to stick with me. Urschel took the subject head on, giving the perspective of the team throughout the aftermath of the scandal, a group strongly impacted in the years that followed but which played no part in the crimes against the children.

Urschel’s book grabbed me like no book has in some time. He’s seems to be trying to use a bit of his sports fame to preach the gospel of mathematics. If you enjoy both sports and math, this book is an absolute must read. If you only enjoy one or the other, you should definitely give it a try. I think you may be pleasantly surprised to find how much you enjoy Urschel’s telling of the other.

Click here to buy Of Mind and Matter on Amazon.