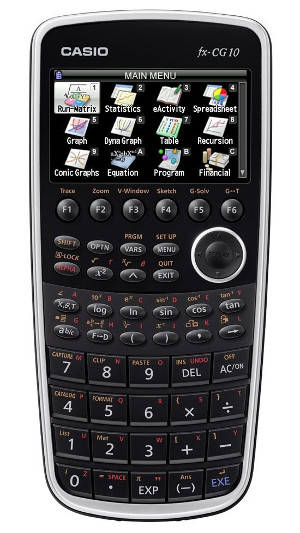 Click here to see the Casio Prizm price on Amazon.

Since its release in early 2011, the Casio Prizm has been a calculator that has caught the eye some of the some students and teachers traditionally focused on the Texas Instruments lineup of graphing calculators. From the first announcement of the Prizm’s, Casio had promotional footage touting it as the first true competitor to the TI-Nspire. I don’t think there’s any doubt that the Prizm did create ripples in Dallas since TI released their own color calculator, the TI-Nspire CX (review) a few months later.

When it first came out, Casio generously provided me an fx-CG10 to review for my readers. I’ve used it quite a bit over the last few years, and I have been very impressed with the Prizm. There’s a reason it consistently makes its way onto my list of the best graphing calculators. Now, with the release of their updated Prizm model, the fx-CG50, the Prizm continues to be a top of line choice for students at a budget price.

That’s the question we were asking when the Prizm was released. The Casio Prizm was not the first color graphing calculator, but it was so much better than previous efforts (which only displayed a few colors), it might as well have been. The Prizm’s capabilities in terms of resolution, range of colors, and the ability to display photographs have changed the game, beating Texas Instruments into the color calculator market by a full 6 months. With the tremendous popularity of high resolution iPods and similar devices that have a similar cost to graphing calculators, you do have to wonder why it took so long for someone to try this. The display features over 65,000 colors, a 384 x 216 resolution, and back lighting. It’s not entirely surprising that Casio would be the first to take the plunge on a color grapher, as its always been innovative with graphing calculators. It was actually the first company to release a graphing calculator.

Who Is the Casio Prizm Designed For?

This is an all-purpose calculator, designed for students from beginning algebra through calculus and beyond. It includes apps that make it appropriate for use in statistics, financial math, geometry, and more. It’s easy to use operating system doesn’t require learning a lot of syntax, so a beginner will feel right at home. The Prizm does not have a CAS, or computer algebra system, so it doesn’t manipulate variables. That might be a let down for some calculus students, but the fact that the Prizm does not have a CAS  makes it legal on almost any standardized test, including ACT, SAT, and AP, and with should be good with almost any high school or college math department that accepts graphing calculators.

Why I Recommend the Casio Prizm

I’m going to have to pick my favorites here because there are a lot of things I like about the fx-CG10/20.

First off, it’s a gorgeous calculator. It looks good in the pictures online, but it’s even better in person. I’ve even had one of my students make the exact same comment I had when I first saw it: “It looks more like a cell phone than a calculator.” It’s sleek, it feels good in your hand, and even though it has a large display, it’s not heavy or bulky (a big advantage if you’re going to be carrying it in your backpack or purse at school). While I loved the look of the original version of the Prizm when it was released, I think the newer version (see below) is even better for the late 2010’s. 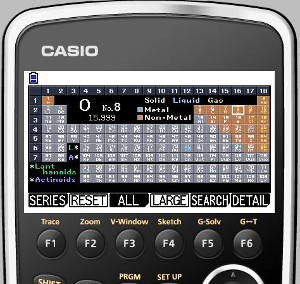 But looks are not going to be the major factor for most people when buying a Prizm. Performance is more important. Casio was wise to take the best elements of their strong fx-9860GII operating system and incorporate them into the Prizm. That means you get a number of preloaded apps, including Spreadsheets, Dynamic Graphing, Recursive functions, Conic Graphs, Financial math, Dynamic Geometry, and Unit Conversion, all of them displayed with a level of detail and refinement not possible on the fx-9860GII’s lower res, black and white display. Additional apps can be uploaded to the calculator via the mini-USB connection that allows the Prizm to interface with computer and paves the way for future operating system updates that have become commonplace with graphing calculators.

This operating system is intuitive and easy to use. It’s also fantastic for students and teachers that don’t want to learn a lot of calculator syntax. Almost everything is done with symbols, just like you see in a textbook, what some have called “pretty print.” That means fractions look like fractions, exponents like exponents, and advanced functions for calculus like summations and integrals also appear just the way they do in the textbook. I also am glad that Casio included features like exact trigonometric values and simplification of radicals. These features are present on some Texas Instruments models but not all (the TI-Nspire does not have them while the TI-Nspire CAS does).

Casio has also been good about issuing updates operating systems for the Prizm. There have been several, the most recent of which was OS 3.11. Some of these updates have given the Prizm the ability to compute with vectors, added a period table of elements feature, and graph in 3D. A probability simulator that can simulate coin tosses, dice rolls, a spinner and more is also available. Operating system updates are always available free at the Casio education website. Your Prizm can be upgraded via the USB cable that comes with the calculator. 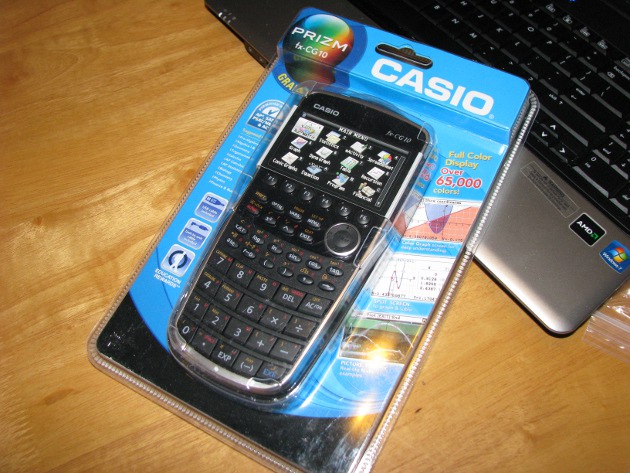 Of course, most of the hype surrounding Prizm’s has been about its color and “picture plot” abilities. They are very impressive. The color display abilities on the calculator are great. I would compare it to a good non-smartphone. While you won’t confuse the Prizm’s display with an iPhone or Samsung Galaxy, the display is still so much better than older black and white calculator screens. If you’ve never used a color graphing calculator, you’ll be amazed how much it adds to the experience. The brightness level is just right to let you see the screen easily in a well lit or darkened room. It’s a little tougher outside on a sunny day, but I don’t know a lot of people who use their calculator outside. 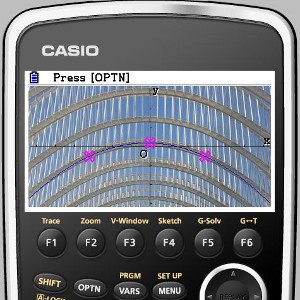 When graphing, it’s great to have the ability to graph each function in a different color to easily distinguish which function is which. Charts and graphs come to life in color on the Prizm. Also, “Picture Plot” is an amazing feature, a first of its kind feature when Casio unveiled it. You can choose from a number of preloaded images Casio packages with the fx-CG10/20, or you can load on your own image files. Once loaded, a set of coordinate axes is displayed right over your picture. The idea is you can do “curve fitting” or regressions to find an equation that matches you pictures (imagine trying to find the equation of a parabolic arch in a photograph of architecture). Then, you can guess and check possible equations that could fit until you find one that works. Or, even better, you can plot points right onto the photograph and use the Prizm’s regression features to find the equation for you. 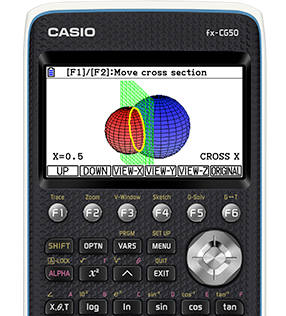 Although you can still find the original fx-CG10 model at online retailers like Amazon, I wouldn’t recommend it. Go for the newer, fx-CG50 model, which I have linked to in this post. While the differences between the two models are minor (assuming you have a CG10 that is upgraded to the latest OS), the new model is a small upgrade in terms of processing speed. It also has a refreshed look, giving it a modern look and feel compared to the original. Additionally, it’s slightly smaller and lighter than the original at no additional cost.

The Prizm is not just good. It’s really, really good. I’ve rambled on for quite a while, and I’m just scratching the surface of what it can do. Much like the TI-Nspire, the Prizm’s educational uses are impossible to sum up in a short review. In my opinion, this is the graphing calculator that best competes with the Texas Instruments lineup of popular calculators. It’s attractive, easy to use, powerful, and it doesn’t hurt that it’s one of the most cost effective graphing calculators on the market.

Click here to see the Casio Prizm price on Amazon.